Lake George is an amazing place to visit and it has lots of attractions. A lot of them are well known such as the steamboats, the miniature golf courses and the water slides.

What a lot of people don’t know is there are a lot of hidden treasures in Lake George, places of historic significance, incredible beauty and quiet picnic areas! This article will seek out these hidden treasures and provide insight as to where they are and what you can expect. 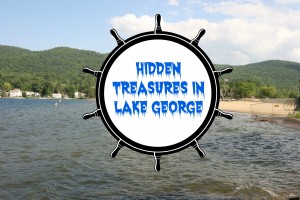 The first place is actually a hiking trail that incorporates amazing views of the lake as well as a gorgeous waterfall. It’s called Shelving Rock Falls.

Shelving Rock is a 1.7 mile hike (3.4 round trip) on the Eastern side of Lake George that usually takes around an hour or so to get up. It’s a great hike for both first time hikers and seasoned veterans. There is some uphill involved in this hike, but the zig-zagging trail used to be an old carriage road, so it’s not too steep.

Along your hike, you can discover a beaver dam and dip your toes in a stony pool at the base of a spectacular waterfall. The falls are only a short distance from Buck Mountain, and they are a picture-perfect location to see optimal views of Lake George.

The Falls is an easy Adirondack hiking experience on a wide, unmarked dirt trail that leads straight to the cascade’s top. You can reach its base by a steep path that branches off to the right. If you wear swim suits or shorts, along with water shoes or sneakers, you can cool off in the refreshing waters. If you follow the waters downstream, you will eventually reach the lake.

A word of caution, though. The path to the base is steep, and the rocks are slippery in spots, so watch your step.

You can continue on to Shelving Rock Mountain, although the view is not as good as the falls. What would otherwise be a spectacular view of Tongue Mountain and the Narrows is blocked by trees. To the left, the trail drops several hundred feet down to the lake (Keep in mind that you will have to hike back up if you decide to continue in that direction). To the right, the woods are honeycombed with a maze of worn, unmarked paths.

At one point, you will see a brief glimpse of the lake on your right. This is not the summit. The trail continues to the left. The hike to the summit is approximately a mile-and-a-half, and generally moderate-to-steep. A final caution is that the trail markers end once you arrive at the peak. You can easily get lost and disoriented if you wander off the trail. If you do, try to mark the path you took and follow those markers back to the trail.

For the more adventurous, the next hidden treasure is a ghostly boatyard at the bottom of Lake George that you can dive down to. There is an estimated 300 shipwrecks on the bottom, some of them more than 250 years old.

Three of the underwater sites are designated Submerged Heritage Preserves and are open to the diving public. Two of the preserve sites date to the French and Indian War (1756-1763). The third wreck dates to the early twentieth century and has been expanded as an “underwater classroom” where divers can learn more about the lake’s ecology.

Perhaps the most famous shipwreck is the Land Tortoise, a beautifully preserved once-floating gun battery from the French and Indian War. It was owned by the British during the French and Indian war and was part of several other boats that they deliberately sunk in order to keep them out of French hands.

According to the website http://www.dec.ny.gov/pubs/62199.html, the flat-bottomed, seven-sided Land Tortoise is 52 feet long and 18 feet wide, with high, sloping bulwarks. Powered by 13 sets of oars, and equipped with 7 gun ports firing 24-pound cannonballs, the vessel has been described as an “ingenious war machine,” perfectly designed for battle in the calm waters of an inland lake.

Traveling a few miles north on the lake is another shipwreck, one that is 200 years younger. The well-preserved wreck of the Forward, one of the lake’s first gasoline-powered vessels, rests upright in the silt in 37-42 feet of water. Built of wood in 1906, the Forward was a sleek pleasure craft originally owned by the Bixbys of Bolton Landing. The boat was used for stylishly touring about the lake, and once transported a wedding party, and raced in the Hague Regatta. A local newspaper of the time described the boat as embodying “all the comforts of the modern yacht” with a mahogany-dressed deck and inside finish. The green of the lower hull and the white top sides are still visible, as are the two gasoline engines located amidships. The Forward’s wreck is listed on the State and National Registers of Historic Places.

Divers interested in visiting any of the historic Lake George shipwreck preserve sites should know that each site is marked with a round mooring buoy, which provides access to the site, and a barrel-shaped navigation aid buoy. Be sure to review the Diving Guidelines for Lake George’s Shipwreck Preserves, and the Submerged Heritage Preserves Generic Mooring Plan , prior to visiting any site.

Now that we are back on land, there are some other hidden treasures to discover. The next one is part of the Lake George Historic Battlefield in Battlefield Park. The park is the site of a battle that took place during the French and Indian War.

Although there are several statues of historic significance in the park, there is a special statue that is a little hard to find, but well worth the search. Nestled in a wooded area on a hill is the statue of a Native American kneeling for a drink from a spring. It is a sculpture done at the turn of the twentieth century by Phimister Protor. Located in a peaceful setting in Battlefield Park it is “dedicated to the many tribes of Indians that were once a part of the region.”

The sculpture was given to the park in 1921 by George Pratt and includes an inscription which reads: “Under quiet pines amidst a peaceful pool, an Indian is poised, dipping his hand for a drink from the cool water.”

Lake George is of course known for its beaches, and no vacation in Lake George is complete without a visit to one of those beaches. This last hidden treasure is one of those beaches. Usher’s Park Beach is a little-known beach located on Route 9L. It has a children’s play area and kiddie beach. It is an excellent place for building sandcastles and watching the boats go by and not as crowded as the better-known Million Dollar Beach, so the whole family can spend hours here soaking up the sun.